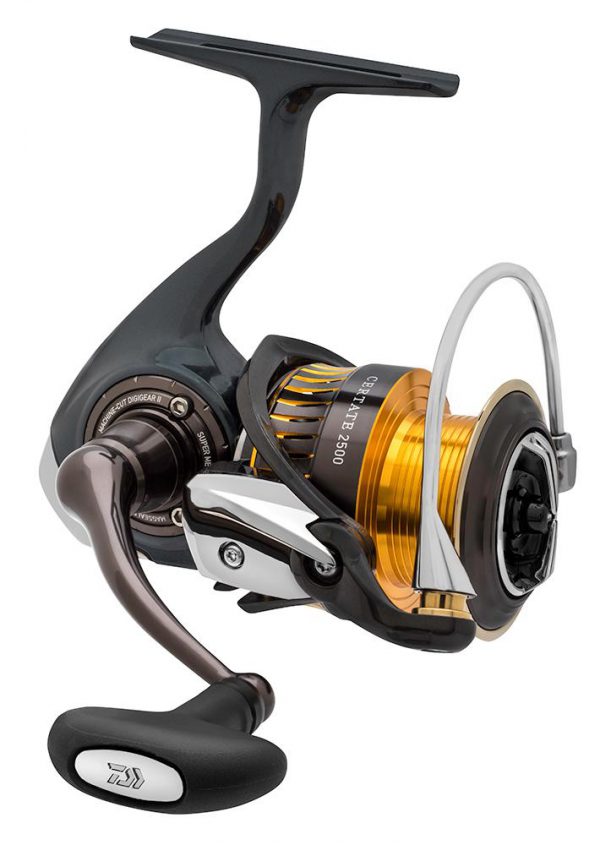 Earn 599 points upon purchasing this product.

In 2004 we introduced the Real Four Concept in the original Certate – Real engine, Real control, Real endurance, Real custom, setting the new standard in spinning reel design and innovation. Since then, Certate has continually evolved and developed through several incarnations to become the Worlds most advanced spinning reel. Certate’s history is epoch making – a revolutionary progress. The new revolution begins with 16 Certate.

The first thing you notice when you pick up the 16 Certate is its solid feel. The machined super alloy body and Zaion rotor is incredibly strong yet lightweight. Its precision engineering supports the re-vamped high accuracy Digigear II drive and silent oscillation system to produce smoother rotary efficiency and increased cranking power like never before. Combine this with Magsealed and Magsealed Bearings and the 16 Certate is the smoothest, most powerful reel Daiwa has ever released.

Given the popularity of saltwater fishing, reducing water penetration into the reel is a major goal to minimise corrosion and promote longer life and better performance. If saltwater infiltrates a reel and dries, it crystallizes, and then erodes gears and bearings.

Through years of research and development, Daiwa found the solution – a membrane of magnetic oil, in conjunction with magnets between the body and the rotor of the reel, which greatly reduces the penetration of water inside the body via the main shaft. Being magnetized this lubrication system avoids any friction, reduces dust intrusion, eliminates oil spray and improves reel life expectancy.

Magseal debuted in 2010 Certate, cementing itself as the world’s most advanced spinning reel, this technology flowed on into Saltiga, Caldia and Exist.

Not content with Magsealing the rotor/anti-reverse system, Daiwa introduces fully contained Magsealed bearings in the line roller system of the 16 Certate to attenuate water intrusion, maintain rotation smoothness (reducing line twist) and increase part longevity. The line roller bearings are the first part on the reel to contact saltwater. They are one of the hardest wearing parts in a reel, and are constantly working. The pressure of the line, continual water and salt impregnation destroys roller bearings quickly.

Introduced to spinning reels over 20 years ago, line roller bearings have now reached the pinnacle of evolution with the addition of Magsealed ball-bearings.

After the Line Roller, prevention of water ingress into the gear system via the reel handle is the next revolutionary step to maintain ultra smooth rotation and longevity of the reel. Traditional bearings require packing with grease or oil and metal or rubber seals which can restrain contamination by water and foreign matter.

This creates friction and impedes smooth rotation of the reel, while minimal twist in the bearings during rotation, can result in penetration of foreign matter, causing abnormal noise and declined rotational performance.

Daiwa has improved the use of traditional CRBB ball bearings by combining them with a fully contained external Magsealed membrane. Water intrusion via the Magsealed Ball Bearings is now a thing of the past, and when they are placed into the gearbox system of the reel, they prevent invasion of water and dust, maintaining the bearings original light, ultra smooth performance. Preventing dust and salt intrusion, greatly reduces reel noise and corrosion and ultimately improves the long-term durability of the reel.

Air Rotor has been standard on many Daiwa reels now, but 16 Certate introduces the lightest and strongest rotor.

Sensitivity is one of the strongest attributes of Air Rotor. The rotor is made from a highly sensitive, high density carbon resin called Zaion. Zaion is a new material, composed of carbon resin and long carbon fibres. This high-density material is light, strong and resists corrosion, used in many of Daiwa’s reels, it far exceeds the strength of magnesium in a strength per unit weight comparison.

Zaion transmits vibration through the reel more efficiently than ever before. By hollowing out the rotor system, a lighter construction is created with more surface area, resulting in increased strength and greater transmission of vibration. With a decrease in weight, the balance has been fine tuned. A lower centre of gravity and precise centre of axis allows the rotor to spin more efficiently with perfect balance. This decrease in weight, increased surface area and new Zaion construction transmits lure vibration to the angler like never before.

The biggest issue with many drag systems is that they are not smooth at the beginning of the drag.

ATD or Automatic Tournament Drag is the newest introduction into Daiwa spinning reels. On one level ATD implements structural changes to the spool metal of the reel that provides greater support of the spool across the entire length of the main shaft. This additional support of the spool reduces spool twist under load, promotes more even pressure on the drag washers and ultimately reduces pulsing of the drag when fighting the fish.

The second aspect of ATD, is an improved drag grease that exhibits a low viscosity at rest, yet becomes more viscous immediately after drag start-up. This reduces initial drag startup inertia and combined with the structural changes of the ATD Drag System results in a smoother drag from the initial hook up, allowing you to concentrate on the fight.

Strength is everything in a larger reel. A solid base is the most important component for any reel. 16 Certate HD introduces an all-new design Monocoque Body. The Monocoque body is a symmetrical, one-piece structure that will revolutionize future generations of spinning reel design.

The Certate HD (heavy duty) 3500 and 4000 models were designed for offshore fishing or lure casting from rocky shores to target hard fighting fish like Kingfish. They need to be strong and resilient to the elements. Originally the HD models were extremely popular, introduced more than 10 years ago. Daiwa re-introduces the HD models into the 16 Certate range, with a focus on body strength that is delivered through this revolutionary new body design.

The gears of the new Certate HD models are embedded in the one-piece Monocoque body construction. Previously the body and a side cover/plate held the gearing in place. The new design allows the HD models to be more rigid, with a better sealing mechanism, heralding the arrival of the next generation in reel design

The new HD models will give anglers opportunities for more powerful fishing styles with lighter tackle.

The new 2016 Certate introduces innovations and unparalleled designs, with the combination of Monocoque, Magseal, Magseal Bearings, Air Rotor, ATD and Zaion, making it Daiwa’s most sensitive and powerful technically advanced reel ever developed. You will feel more connected to lures, detect more bites and fight fish with ease with Certate it is Technology to Feel

Score 10% off your first order