By Mike and Terry 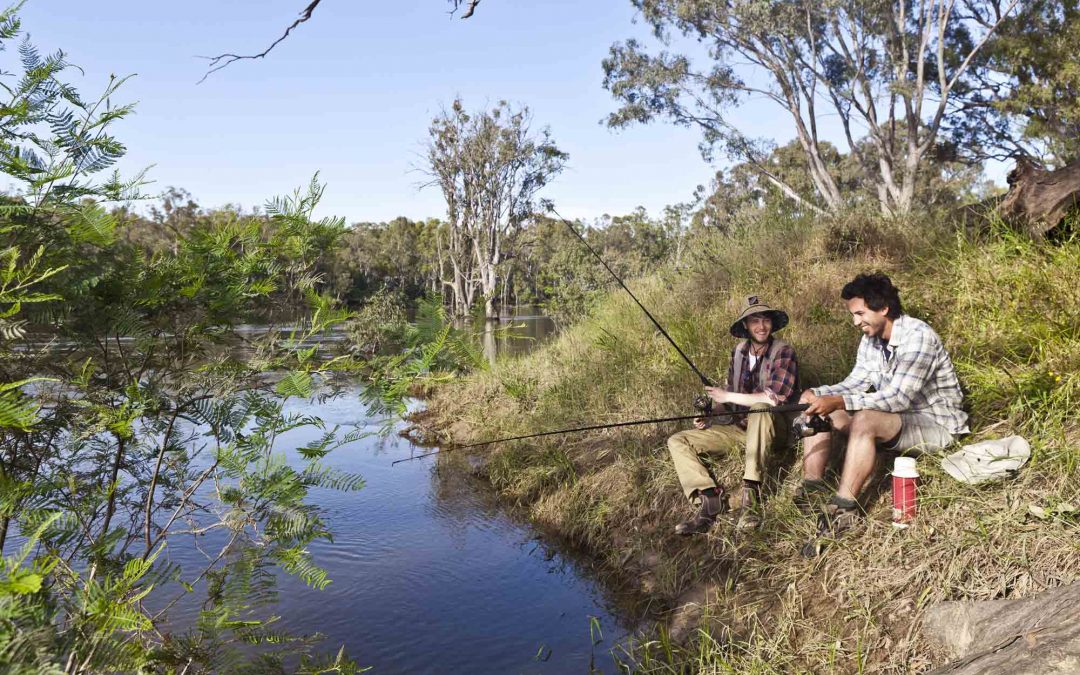 The keen fisherman who have braved the heat are being rewarded for their efforts.
A lot of the fish being caught at the moment are falling to bait.
The usual baits such as grubs, worms ,shrimps and yabbies all producing fish.
The stand out bait being chicken, yes chicken. I have been shown pictures off some massive cod being caught on it.
Surface lures are starting to find fish and as I write this report the numbers of fish being caught on surface lures is becoming greater with each trip.
Spinnerbaits and small hardbody lures are working well when casting them into the shadows of a morning and evening.

The local channels have been fishing well if for those who have gone out and braved the heat. Yellas are active and one lure that has had success is Jackall TN’s. Diving hard body lures are worth while trying for cod. Where redfin are present in channels, Bullet lures, amongst others have done the trick. Bait will of course work. Worms, shrimp and yabbies as well as cheese if you want to try your luck for cod.

One could say that flow out of Goulburn Weir is reasonably higher than usual but reality is it is now becoming the ‘norm’ and therefore it is worth fishing. Spinnerbaits and/or diving lures have been working on the resident cod/yella population. Surface lures have been effective on cod. Bait listed for use in the channels will also suffice for all species present.

The Broken Creek system upstream of Numurkah is an ideal place to try if you want to pass a few hours in a peaceful environment if you are not concerned about what species you are after. The Nine Mile Creek is an ideal system to try if you are happy chasing carp. Of course there is a chance of picking up natives throughout the entire Broken Creek system. A recent outing, using worms as bait produced a non-stop fish feeding session which resulted in no fish being landed until larger baits were presented eliminating the smaller ‘bait stealers’! Shrimp and yabbies can be captured in the creek and used for bait…or the yabbies can be taken home for bait to be used at other locations.

In general, wherever you fish, if the heat is getting the better of you of late, you can go ‘nocturnal’ and fish after dark. Redfin tend to slow down after dark but all the other species are still active. Trekking through snake infested country after dark may not be to your liking. If this is the case, you can easily find a cleared area to bait fish from. A good head torch is all you need.

Lake Eildon is doing well for natives at the moment despite the high surface water temperatures being reported. Murray cod are taking frog pattern, purples and black in deep diving lures. Spinnerbaits are also working well. You should also have some luck with cheese, yabbies and scrub worms from the banks. Similar tactics are working for the yellow belly, trolling for trout you will need to be down a bit deeper using Tassie devils on Para vanes. Reddies are a bit of a mixed bag at the moment. There have been quite a few caught of reasonable size. If you are chasing reddies near Fraser camping try the 10 metre mark around the trees, over in the Delatite and Howqua arms try a little shallower, but yabbies, scrubbies and soft plastics are what you’ll need.

Down the Goulburn River, even though it has been running very high through irrigation entitlements anglers that are targeting within 3 feet of the bank and the flooded grassy flats are doing well. Scrubbies, soft plastics, minnows and bladed lures have been the big winners.